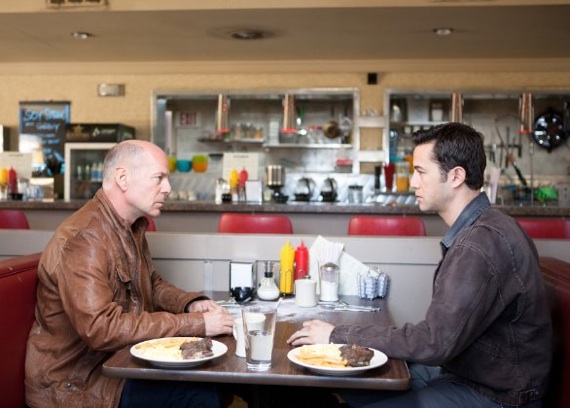 Looper is that rare film we get in the Fall season that is actually good.  What's more, is that it is a science fiction movie with brains and class. The film takes place in 2042, where we follow Joe (Joseph Gordon-Levitt), a professional hit man. His job is made easy since his targets are sent back in time from the future and placed right in front of him (on an almost literal silver platter). Complications arise when Joe's future self (Bruce Willis) is sent back to warn Young Joe of a troubled future that must be stopped.


This first half of this film is fantastic.  The director immediately brings you into this world using credible effects, internal narration from Young Joe in a film noir/Blade Runner style and simple time travel logic (with many flaws when you really think about it, but not in the moment). This film keeps you on your feet, always wanting to find out what happens next.  There are many scenes in particular that will stay with you for a long time: the deterioration scene, watching Old Joe deal with murdering someone, and a character reveal involving telekinesis.

Being a time travel movie, you can expect moments involving a complicated narrative in which you duck in and out of different time 'zones'. A third of the way in, the director takes us on one such trip, where the film doubles back on itself revealing a 30 year montage which brings us up to speed with the time travel rules. This is the kind of twisted narrative I was hoping would keep up, but it was merely an isolated occurrence.

It is after this, in the middle of the film, that Looper dials itself down to become a much more subdued movie. Which is fine, since we then have time to develop the characters and get to know everyone. Unfortunately, the third act never wakes up. Aside from a ridiculous shoot out scene involving Old Joe and a few dozen baddies, the scope of Looper becomes greatly reduced. It is still entertaining, but not consistent with the first half. There are no more twisted narratives, the Young Joe inner monologues have mysteriously disappeared (save for the final line in the film) and more and more cheesy moments occur involving telekinesis.  However, the second half is not without its benefits. We are introduced to 2 fantastic strongly written characters played by Emily Blunt and an ever-so-rare great child actor.  As well, the film wraps up perfectly in a satisfying conclusion that would be right at home in any time travel movie.

Summary:
There is not much to complain about here. You have to appreciate a movie that is original and keeps you engaged. It just has an inconsistent second half that dials down the energy and intrigue from the beginning. Also, keep in mind that this is not the action movie that the trailer proposes. I would recommend this to most everyone because it is at least creative and fresh. This movie ranks #889 of the 1833 movies I’ve seen.
Posted by Peter Crouch at 10:44 AM