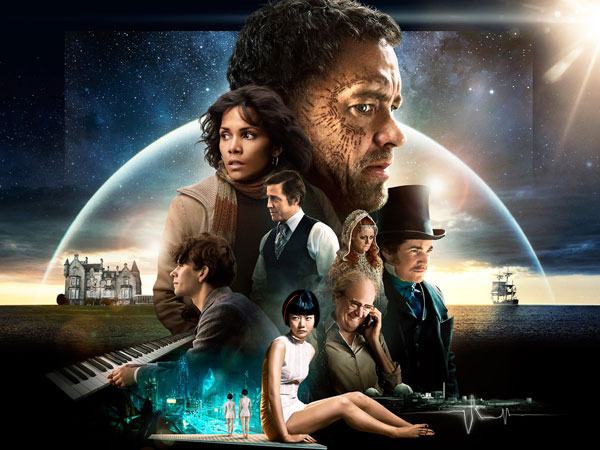 Do unto others as you would have others do unto you.
Wash. Rinse. Repeat.
9.0/10

Cloud Atlas is an epic yarn about 6 different stories in 6 different decades involving many different people. The actions from one story will eventually affect the next story.  Each action that is taken and each choice that is made will impact the future. This type of interconnected plot has been done before in films like Magnolia  and Crash, but never in such a grand scope as this.

This 3 hour film may take place over centuries, but what binds the assortment of scenes together are the characters.  Even though each story has different characters in them, these bodies are vessels in which souls are transported from beginning to end.  Cloud Atlas takes a strong stance on spirituality, namely reincarnation and karma (often associated with Buddhism). So in order to tell 6 different stories which are affected by each other, exist decades apart, and involve various souls which redeem or condemn themselves, the three filmmakers have chosen to make their film using a narrative that hops forwards and backwards throughout time.

It is at this point in my description that you will probably know if this movie is for you or not. If you are not open to the concept of passing souls, and if you do not like movies that tell their story in a twisted manner, I cannot recommend this film.   Cloud Atlas is not for everyone.  But it is certainly for me.

I will forever be a fan of anything that is creative with flaws over something that is done perfectly and without purpose or ambition. I will admit that Cloud Atlas is long. You feel those 3 hours. But after I’d left the theatre, it stays with you and that length is necessary for its scope. This is an engrossing film that envelopes you. You need to be held within it to let it work.  About half-way through you clearly understand the point it is trying to make.  It goes beyond the point of beating you over the head with its message.  The message becomes more than idea; it transcends to a matter of fact that just exists and binds the film. The scope is what makes this movie.

The actors are all great.  Each undergoes extensive and mostly impressive make-up alterations to make them white, black, Asian, old, young, scarred and the opposite sex.  Most of these changes work (Hugo Weaving in drag is always amusing) then some just look forced (Hugo as an Asian borders on offensive). But it is the lovable Jim Broadbent who steals the show as both the grumpy old composer and the comedic relief Book Publisher.

The only fault I have is that the film can come across as being cheesy if you aren’t open to it.  You are required to be open to the make-up and the theme of ‘making kind choices’. You have to trust the filmmakers. The stories told from the future are a little tough to understand at first, but you become accustomed to their language and terminology. And each of the stories are built off of cliches; like an honest reporter trying to expose a secretive corporation, a white man with a good heart reaching out to help a black slave, or a dystopia where someone tries to brake lose and become an individual. But now that I’ve thought about it, these cliches are essential to get their message across: we continually come across the same stories and scenarios and it is our choices that we make within them that define us and our future. As a kid in Halle Berry’s 1970’s segment points out, “Just like any good [story], you know what is going to happen.”

Summary:
I’d have to watch it again (and again) to fully understand how each soul is affected and how each transition is linked thematically scene by scene, but I already love this film.  Cloud Atlas is a long movie that requires your openness and appreciation.    It is a film with plenty to say and plenty to show. What you take out of it, is up to you. And whether you like it or not, we can be grateful that ambitious films with a singular vision and creative storytelling exist.
Posted by Peter Crouch at 12:11 PM