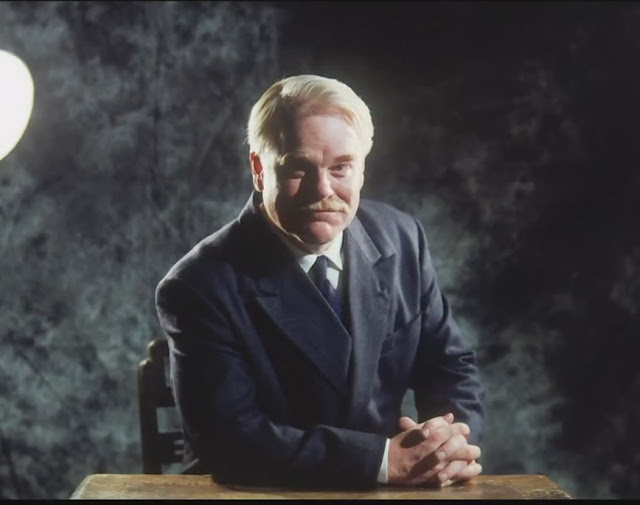 Paul T. Anderson is my favourite modern writer/director if for any reason that his previous films (Boogie Nights, Magnolia, Punch-Drunk Love, There Will Be Blood) are all masterpieces and he is an ambitious auteur. Unfortunately his latest film, The Master, might just be too ambitious and gives you the sense that he is over-reaching.  Searching for something, but he's not sure what.

As WWII comes to an end, Freddie (a depressed, alcoholic soldier) returns home feeling lost and uninspired.  He stumbles into a friendly group of people who welcome him into their lives.  Not long does he discover that these folk are part of a movement called The Cause, which is led by their cult-master and teacher, Lancaster Dodd. Dodd is convinced he can cure Freddie of his problems and give him purpose as he becomes a member of The Cause.


The main draw of this film is that it is powerfully acted by Joaquin Phoenix (Freddie) and Philip Seymour Hoffman (Dodd).  Phoenix is constantly hunched over with a lack of self-assertion, and has a look in his eyes that suggest there is much more to him than he lets people know.  Hoffman represents his opposite and is poised with confidence and often charismatic when with crowds. Yet the 2 are instantly drawn to each other in an amazing early scene where the master evaluates his subject Freddie using his own hypnotism based interrogation. Johnny Greenwood's score is also fantastic. It is whimsical and dreamlike when demonstrating the alluring powers of The Cause. It then warps into odd percussive music, which is reminiscent of There Will Be Blood, when fueling the driving unsteadiness of Phoenix's character.

There are beautifully composed shots throughout The Master, but Anderson is mostly subdued compared to his earlier grandiose style. The issues arise not with the craftsmanship, but with the film's purpose. The film is easy to follow and you can understand everything that happens. However, the reasons and motivations that lie beneath are what leave me confused. By the end, most films have payoffs through characters or themes. These are what can drive a film and give it reason to exist.  The Master is either much smarter than me (which is a totally valid option) or it lacks direction and purpose. Overall, I can discern that there is an exploration of how Freddie is conflicted with desiring to be both a master of his life and search for his own master. Yet the film runs at almost 2 and a half hours, and it seems like much more is trying to be said but nothing is focused on. Without a solid theme or purpose, the film lacks structure and satisfaction........just like Freddie!  Hey, I think I just got it! It's all meta!....or not.

Summary:
Astounding craftsmanship, yet befuddling. A movie that seems confused which can leave even the most concentrated viewer lost and without a master. If you interpret the film differently or understand the meaning of The Master, please enlighten me. I’ve place this middling film as #542 out of the 1830 movies I’ve seen.
Posted by Peter Crouch at 10:40 AM