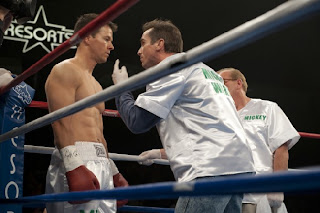 Yet another boxing movie

Recently nominated for a handful of awards, The Fighter is yet another boxing movie, but this one is a true story that didn’t feel like the conventional ‘inspirational sports movie.’ There was a strong message, (working together as a family for the benefit of everyone), and this helped the movie to focus more on being a family drama than an underdog sports championship journey.
The story follows a broken family including the brothers Mick (the younger up & coming boxer) and Dick (the ex-boxer, now drug addict) who attempts to coach his younger brother. Problems arise when Dick can’t handle his drug problem and this affects their whole family including Mick’s career.  Dick is played by Christian Bale (who recently won an Oscar for this role), and he is clearly the energized and entertaining part of the film.  His mannerisms and the way he talks steals every scene, which is interesting in a ‘meta’ sort of way since Dick similarly steals away Mick’s life and career because of his self-destructive ways.
The film is bookended with unnecessary documentary set-up/closing  scenes which are never referred to again.  But I suppose the director does try to fill out this docu-feel by shooting the boxing scenes with different cameras (some sort of handheld TV camera).  Or maybe because there have been so many boxing movies, he needed to find a way to make his look different.  I was also expecting more stylistically from the director who previously made creative films like Three Kings and I Heart Huckabees. There was, however some amazing soundtrack choices throughout including the Red Hot Chili Peppers and a great montage using Zeppelin’s ‘Good Times Bad Times.’
Summary:  Although it didn’t wind up being yet another sports movie, it was still just another family drama.  Christian Bale definitely steals the show while providing some good laughs and the script certainly helps you to feel right there within this broken home. I have the mediocre Fighter only ranked at #761 out of the 1502 movies I’ve seen.
Posted by Peter Crouch at 10:39 AM