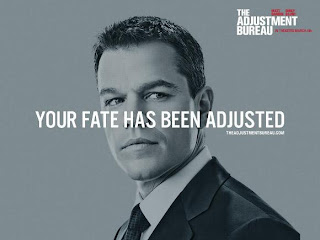 7.2/10
It’s been a slow start, but I’ve finally seen my first film of 2011.  The Adjustment Bureau stars Matt “never-picks-a-bad-movie” Damon as a young popular senator who falls in love with a woman...that is until a secret conspiracy group known as the Adjustment Bureau approaches him to warn him that he is never allowed to be with this woman.  They inform him that they are in control of the entire world and decide the outcome of events according to a ‘master-plan’.  The rest of the story plays out as a quasi love-story/conspiracy movie wherein Damon tries to uncover the secrets of this group and find out why he isn’t allowed to be with the one he loves.
The original story was written by the great Philip K. Dick who has written many great science-fiction stories, including the stories for Minority Report, Total Recall and Blade Runner.  Therefore, for this film, you can expect the plot to be fantastic.  It is clever enough in its imagination, and still has loads of humanism.  The movie has a great balance of romance and thriller elements.  And the score is done by the always soothing Thomas Newman.
The only thing that concerned me throughout was that the whole conspiracy group was treated too lightly and in a cheesy way.  Damon’s character sort of shrugs off the threatening powers of the bureau as if they were no concern of his. Which I will allow since he does this merely because he is so focussed on being with his dream girl; his priority is his love.  However, I did find that the bureau was handled in a very cheesy manner that made them look like a joke.  This did help the movie keep a very light tone, but I felt it as a missed opportunity to create tension.  But I am not here to criticize what the movie should have been.  I do suppose the lighter tone was intentional and helped to keep the romance at the forefront of the movie.
Summary: Since it is based on a great Philip K. Dick story, there is definitely a fascinating plot and gives you lots to think about with regards to ‘destiny’.  But I felt that there was very little tension in favour of a lighter tone, and this failed to have me concerned with the outcome of the story. Yet the lightness does make this a very approachable and enjoyable movie for the general audience.  This is at #383 of all the movies I have seen (on flickchart.com).
Posted by Peter Crouch at 10:09 AM