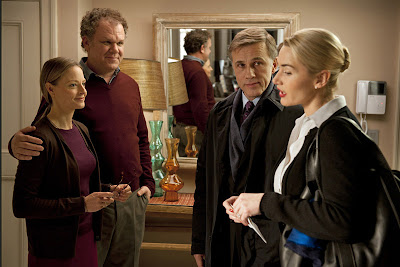 Prepare for a Play. An Awesome Play.
7.9/10
Carnage is a very very short film based on the play ‘God of Carnage’.  When two kids get in a meaningless fight, the parents of the victim invite the bully’s parents over to discuss how to deal with the situation: Parents to Parents.  Initially no one wishes to directly place blame on each other, but undercurrents of contempt and insinuations begin to come out.  Then the four very opinionated parents remove their innocent shell and they begin heated arguments about their morals and views of society.
When I said ‘based’, I mean literal translation.  This barely 80 minute feature feels like a play that has been filmed, rather than a play turned into a film.  The cinematic elements are bare-boned.  There are no fancy camera movements, it is all objective viewing.  There is no music except for the two bookended scenes that showcase some bombastic music by Alexander Desplat. With the exception of these brief bookends, the entire play/film takes place in a single apartment room with the 4 characters.
That being said, the elements that have been brought over from the stage world (script and acting) are the main attractions.  There is an ever-present sense of resentment and passive aggression underneath everything the characters say.  They all begin by subtly attacking each other with off-hand comments, until they can no longer tolerate each other’s ‘way of life’ and begin to have an all out feisty argument.  The way the script slowly turns them on each other and pairing them up differently (family vs family, men vs women) is well timed and gives each character their proper resolution and arc.  Meanwhile this biting dialogue certainly gives the actors lots to work with.  You can tell they were all having a lot of fun making this, probably over less than a week.
Summary: This is a viciously delightful and cringe-worthy play put on film. It gets funnier and funnier as the tension steadily rises from their prejudice attacks on each other. The script is the highlight and Jodie Foster is particularly fantastic.  Yet ultimately this is only a ‘Play Movie’.  It is a short, word-for-word translation from stage to screen with limited film techniques that could make it unique to the screen.  But perhaps it is this objective filmmaking which forces us into the increasingly cramped apartment and to experience the verbal lacerations firsthand. If you prepare yourself for a play, you may just love it. Of the 1660 movies I’ve seen it lands nicely at #356.
Posted by Peter Crouch at 2:04 PM