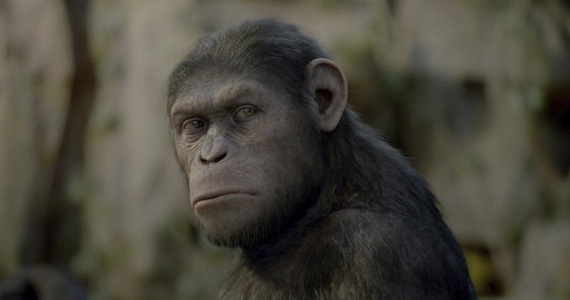 Way better than it has any right to be

8.8/10
To me, this is a welcomed surprise in the good ol’ lack-luster Summer Blockbuster season. Despite its annoying title, Rise of the Planet of the Apes (I count ‘of the’ twice) is an incredibly entertaining film. I had little to expect for this one due to the embarrassing trailers, the no-name director and writer, and the fact that no one needs a another movie in this series; especially since the last entry in the series was Tim Burton’s 2001 abomination. I am a big fan of the 1968 original, and I find that even though these are stylistically very different films, they are both on par with quality and entertainment.
This 2011 movie acts as a prequel to the original, where we experience how the Apes in question Rise up and take over our Planet. Albeit, they might be planning for another sequel or 2 in order to fully complete said ‘Rising’. I also couldn’t help but think about Animal Farm since I am currently reading that book. This film makes sure to shed the camp-factor that is found in the original and tries to remain grounded in some sort of reality. Despite the silly concept, Apes 2011 has numerous well crafted moments where the director effectively makes us feel thrilled, uneasy, excited and emotionally involved. However the majority of acclaim should be given to the digital effects and Andy Serkis.
If you don’t know who Serkis is, he is the master who played Gollum (Lord of the Rings) and Kong (King Kong) using the motion-capture suit technology. Here, he plays another creature, Caesar, the ape who leads the uprising. Since he is a methodical actor, he delivers an exceptional performance here (along with the incredible effects used to digitize Caesar). Even though this is the 2nd ape he has played, Caesar is much different from Kong, playing less on the emotional side, and focussing on a more exaggerated approach. Grunting and crawling his way through the film, he upstages anything else we see and decidedly becomes our main character. The director puts the primates at the forefront of the film, and this was a wise decision (essentially flipping the point of view for the entire series). However, he winds up making most of the humans into negligible characters that serve little use (Brain Cox and Freida Pinto), or are over acting parodies (John Lithgow and Tom Felton). But who cares, because we are here to see the monkeys. There are other problems with plot holes and ridiculous time lapses, but since we are so devoutly following the life of Caesar, we don’t care.

The old adage ‘less is more’ is always a great idea in film storytelling. Minimalism can be very effective when applied to dialogue; we listen more, when less is said. The best parts of the best movies are often lacking in dialogue and focus on the images we are presented with (think Wall-e, 2001, Tree of Life, No Country for Old Men, There Will Be Blood). Thankfully, since much of the film focuses on Caesar, we spend a lot of time just observing this speechless ape interact and it certainly is enthralling. But one can also argue that ‘more is better’, and the final action sequence that takes place on the Golden Gate Bridge will certainly deliver on the awesome factor.
Summary: Rise of the Planet of the Apes takes its time to develop a well crafted ape character that will impress on both a technical and emotional level. But it is the emotional grounding that makes such a preposterous movie work. Many of the human characters fall flat, but they aren’t the main focus anyways. There are surely sequels to follow, that will finish the ‘rising’ and I can’t wait to see what Andy Serkis will do next. This is movie #199 of the 1592 films I’ve seen.
Posted by Peter Crouch at 9:36 PM