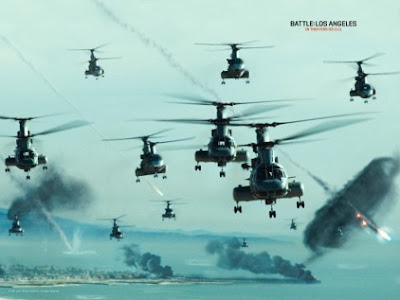 What a shame, he was only 2 days away from retirement.

0.2/10
On the back of the DVD case of this movie, there is a review that says“...like Independence Day or District 9, ...but cooler!”  That is quite a bold statement by a reviewer who was clearly paid to write that.  A more apt description of this film, by the majority of film reviewers out there is more like, “...this is the end of cinema.”  That’s a pretty depressing statement, but the movie well deserves such ‘anti-praise’.
The story follows a group of a marines who face off against an alien invasion on the coast of Los Angeles.  Its approach is similar to Black Hawk Down wherein we are following our platoon through the war-torn streets of the city. The aliens themselves are laughably silly and barely any explanation is given to their attack, other than they want our water.
The main reason this movie falters (other than failing to emulate Black Hawk Down or District 9) is the script.  If ever you wanted to know what a bad script is like, or what the term cliche means, then you need to look no further.  Battle: LA is littered with every single ‘military dialogue’ cliche.  Every sentence is an over-used and therefore meaningless phrase that is ripped off of any other war-movie. Such gems include:
There was even an ‘emotional climax’ that involves the marines reciting the numbers on their military tags, that was nothing but hilarious. The special effects are not even that impressive to forgive the script.  You don’t care for any of the characters, you don’t care about what is going on, but you do care for when this movie will end.
Summary: This movie just came out on DVD, and it is not even worth a rent.  A movie can have bad acting, bad directing, bad effects and it can still be somewhat enjoyable with a good script, but with a terrible script that is not even self-aware, a movie can fall hard.  Battle: Los Angeles is a crash-course in how not to write a screenplay.  This is #1410 of the 1555 movies I’ve seen.  Yes, there are still worse movies.
[I apologize if I used any cliches in this review.]
Posted by Peter Crouch at 10:07 AM