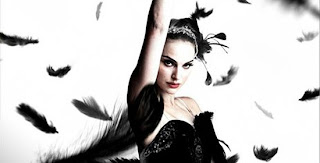 9.6/10
Going into a movie only knowing that it is about ballerinas and that it is a psychological thriller definitely did not prepare me for this film.  As it turns out, this is a really edgy film that sent chills through me in every scene.  The plot revolves around a ballerina trying to become the lead dancer in an upcoming production of Tchaikovsky’s ‘Swan Lake.’  The more she focusses on being the best dancer she can be, she becomes so engrossed in her role that she loses grip of reality.  And so, it is in this direction that movie begins to spin (seemingly) out of control; but in a good way.  It’s almost as if it spirals so far out that it seems to come out the other side and wrap up in the year’s greatest finale.
Some great acting from Natalie Portman especially since she actually had to dance professionally.  Fascinating camera work from the director Aronofsky including his usual behind the head shots, and numerous scenes filmed (symbolically) around mirrors then digitally removing the camera crew.  Tchaikovsky’s music for the ballet is sweeping and lurking throughout the whole film and often twisted around in cool ways. This all helps to create a great tone throughout the film; and the jumps and chills are handled in a sort of twisted-fun kind of way.
My favourite aspect of the of the movie however (aside from the operatic ending) is the theme.  The film deals with the level of commitment and passion that an artist must have while fulfilling their potential.  Portman’s character discovers to what extent she must commit herself if she wants to be lead dancer.  As a musician myself, there were numerous parallels to think about in terms of how committed I need to be if I want to be a professional musician.  But enough of the serious thinking, the film is still some good ol’ bone-tinglin’ fun even without all the symbolism.
Summary: I’m still trying to decide if I liked it better than Inception, but this is definitely an awesome hybrid of a movie that is creepy yet beautiful.  It has already risen up to be #111 of the 1398 movies I’ve seen [on flickchart.com].
Posted by Peter Crouch at 10:13 PM